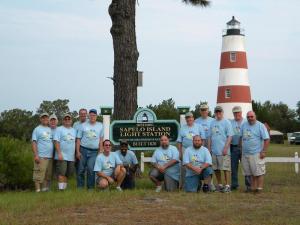 Welcome to the home site for WB4WHD. My name is Bill and I first got my ticket in May of 1994 in PA with the original call of N3RXS with a “no-code” Technician class license.

In May of 2009 I finally got around to taking my General Exam and passed and decided at that time to change to a vanity call of WB4WHD.

In April of 2022 my wife and I relocated to Roxboro, NC and have a nice place out in the country. I have yet to set up my HAM “shack”, but am hoping to at some point this year. Right now we have several projects we need to get done so it is taking a back seat for now.

My primary HF station consists of a Yaesu FT-840 at 100 watts PEP with a G5RV wire antenna at 55 feet and an Off Center-Fed dipole at 45 feet. The system is powered with an Astron VS-35M power supply with a 28mah battery system as backup. I also have an LDG AT-100 Pro auto-tuner as well as an MFJ-941E manual tuner. In addition I have a Yaesu VX-7R used for portable and motorcycle mobile operations and a couple of the Baeofeng radios as well as two BTECH mobile rigs.

Even though I just started HF in May of 2009 I have already logged 600+ QSOs and participated in the first annual 13 Colonies Special Event in which I reached 11 of the 13 colonies.

I support direct QSL with a SASE and request same and the I also use eQSL and LoTW with logs being uploaded usually on a weekly basis and always on a monthly basis.

Over the years I have also participated in various Emergency excerises for training as well as real life. Including floods in Northeast PA, Osram Sylvania Chemical Spill drills, TMI radiation drills as well as assisting with commucations during Sept 11th 2001.

Starting in November of 2009 I became a member of the Board of Directors for the Kenehoochee Amateur Radio Club in Marietta as well as the club Secretary. My additional duties with the club include webmaster, as well as Field Day Co-Chairman.

Feel free to click around the site and be sure to listen on the airwaves as I work on building my list of QSOs and QSLs.