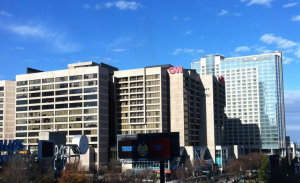 I moved to Atlanta, GA from a small town in Northeast PA called Troy. I am a graduate of Troy Area High School, as well as Thompson College and Eastern University with degrees in Computer Science, Business Management and Management of Information Systems. In 2018 I completed my BS in Photography from the Art Institute.

I am currently working for Contegix Managed Web hosting based out of St. Louis and I get to work remotely all the time!

I really enjoy the Atlanta area, but after 14 years the traffic is getting really old so the wife and I are moving to the Raleigh, NC area next year in 2021.

I have been working with computers and programing for about 30 years now in various platforms and systems. One of the first personal computers that I owned was an old Commodore VIC-20 that my uncle gave me for my birthday when I was about 13. I became inmmersed in computers fairly quickly and started writing my own programs.

Over the years as technology moved from the old systems into the current IBM-PC standard, I quickly learned that it was cheaper and better to build my own custom systems instead of buying them retail so I started doing PC builds and that eventually branched into doing repairs and builds for other people as well.

I really enjoy working on computers and getting things designed and built exaclty the way I want them and it makes me feel good to do the same for my customers. Although there are some good retail builders out there, I personally feel that you get more bang for your buck building a “white box” PC.

I also have studied several programming languages for both PCs and mainframes, including VB, C++, J++, Java, PHP, HTML, COBOL, RPG and AS/400 Systems and Operations. I always figured if you are going to get into computers, why not learn enough so that if the need arises, you can write your own programs.

When it comes to operating systems, I have played around with all of the most popular ones, Windows, macOS and Linux as well as Unix. I know Windows has the largest market share and most people think their PC is just useless unless they run Microsoft products, but that is just bunk. All Microsoft is really good at is marketing, because their software is full of bugs and security flaws like you wouldn’t believe. I have worked with Linux alot over the last few years and it has really come a long way in the past 2 years as a viable replacement for Windows. Linux doesn’t have all the bugs and issues that Windows does. One of the biggest downfalls of Linux right now is not enough commercial software companies support it yet with cross-platform versions of their software like they do for Windows and macOS but it is growing every year.